The Brits are known for a – let’s call it carefree? – handling of top secret intellligence and in the eighties of last century a bad joke went, that reading the dailies and riding some notorious trains would be all the Russian resident had to do. So its no wonder that in times of youtube a clip of an internal meeting of the board was leaked showing, among others, rare footage of George Smiley.
In the seventies Smiley acted for the brief period of two years as chief of the British intelligence service, Saul Enderby was his successor. Despite the fact that Smiley used as camouflage the screen-name “Alec Guinness” and even appeared in some lesser known films throughout the twentieth century, his background and origines are something of a mystery, there is even not a confirmed date of birth given.
D.J. Moore Cornwell, himself a retired agent, was used as official biographer of Smiley, and in a recent interview he stated that he has lost track of his old chief a bit and imagines him living somewhere very retired keeping bees. Obviously this remark is a reference to Mr. Holmes who spent his later years beekeeping**, its more likely that George Smiley simply is dead. Cornwell’s books, of some literary value, should be seen as what they are meant to be, desinformation at its best.
Generally the dates produced by the official biographer and other sources are inconsistent. A concise biography is not to reach, a useful overview given in the German “biographical scetches” by R. Kost*.
Officially Smiley joined the circus 1928, but this is not very likely – Smiley has German roots, he admits at one point that he knows Hamburg from childhood days, he’s fluent in German. After graduating from Oxford (Blackwell’s?) he went to Germany as lector at a Southern small university (Tuebingen? Heidelberg?), maybe he did a kind of precontacting for the circus, but he officially joined only in the late 1930s. His scientific field was the German Baroque, 17th century’s literature especially, and he is saied to have been working on a biography of an obscure writer (Opitz? Kornmann?). He left Germany in the beginning of 1939 and the following years saw him travelling a lot through Europe. No easy task and his ability to camouflage, to vanish, was perfectioned. Four years in wartime are long and 1943 he came back home, bringing with him a nervous tick he struggled to control. As natural German speaker with all his knowledge he would have been an inestimable collaborator at Masterman‘s Double Cross system, but there is no proof for this.
Through the war he must have been to Ireland, because  in the seventies, when the situation really came out of hand he had as a kind of bodyguard an Irish-Scot known only as “Old K”, a trigger happy fellow of Smiley’s people who later worked for the Americans. Their relation seemingly dated back to 1944, but no details emerged.
Smiley is described as a small, corpulent (or plainly fat) man, his face dominated by large glasses. His wife, Lady Ann Sercomb, turned the vile remark of one of her relatives, who described Smiley at their wedding day as a “bullfrog”, into a loving nickname, calling him “her frog”. He asked her for her hand in marriage shortly after the end of the war, astoundingly she agreed. He started an academic career and 1947 she was away with a sportsman (footballer?). He joined the circus again. There was no divorce, sometimes George felt the need to bath in self-pity, but when she asked him to come by, sort things out or simply be there, he came and sorted and was. Smiley’s loyality was seemingly indestructable, and after all he loved her. She once told him that he was a talented lover and his foot massages were to die for.
Through the fifties and sixties he worked for the circus, a lot of travelling involved, slowly rising through the ranks. Sometimes he was regarded as being out of business, but he now and then turned up there for a tea – only since Enderby’s rule and the end of the “Karla-affaire” he was not seen anymore. The last “official” photograph was taken when he travelled to Jerusalem (1982?).

The footage shows an internal meeting under Enderby circa 1980, “Karla” is the code name for Smiley’s Russian opponent. Nothing “happens”, they only read papers. Sorry for the low sound.

A rare picture of young George, approximately eight years old, according to Kost found in the files of the circus, date and location unknown.

A picture allegedly showing Smiley during the war, date and location unknown. 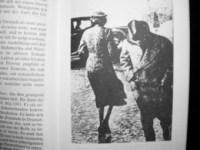 A picture of “Karla”, unknown origin, no further details given.