Do you remember that parcel I mentioned somewhere in the last post? Probably not. The friendly men of the German customs wanted to know what’s inside – me too! – and so we chatted a bit while I cut it open. We admired the contents and then I went home again. They did not want toll from me. 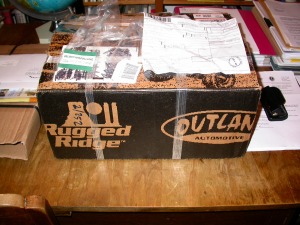 It contained this – see the before picture:

You may not believe it: But this is 1 and ½ copies of the Austin Chronicle ! See the after picture:

Here in a different light: 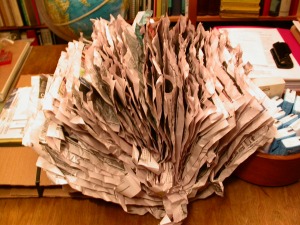 Under all that paper hidden lay a small electronic wonder, which now graces my desk: So small, so lightweight, so silent ! The graphic department of this wonderful Blue Angel alone has more kahumpf than the outgoing crumbling towers it replaces had in their cpus (Ger., Eng.) – here they go:

Definitely the chic of the 90s, when towers were big – well, those of the eighties were even higher – and screens were still Braunsche Röhren (Ger., Eng.), heavy and radiating, glowing sometimes.
A very nice effect of the Angel’s arrival chez Mago is that I have a lot more space in the bookshelves to the right of my desk, and because of this, on my desk itself: For the first time in years I can see the whole surface of this modest working place, and – what’s even better! – I can look out of the window in front of me! Another nice result is that the old radio that for years was stuffed in the highest shelf could move down a bit, roughly one meter (!), what means that the Classical Station is going again. They have a very interesting Jazz hour from 23:00 to 00:00, and I really missed that one.
The Angel touched down carrying Windows 7, and I am delighted. It all works, even together! That is not a thing I would expect from a product that has Microschuft written on its forehead, but I live and learn! I managed to import my favorites into Internet Explorer; I checked the update thingies and they work, even the security settings are fine. I do not believe that there’s a need for something like CCleaner or such anymore. What does Not fit into the picture is the Donnervogel, Thunderbird, for the mailery. The old Outlook Express is seemingly dead, the new Outlook is far too large (it is used by mago inc. with good avail, it’s over the top for this private only use), but this will be sorted out. Maybe some messenger will do the trick, or is Pegasus still around – I don’t think so.

Let me end this with a deep bow towards a great man and true friend, the one and only Mr. XL from Austin, Texas. With special greetings to RJ and Lola.