When You look at the following coat of arms*, you may notice that it is something royal, because there is a crown; a lion, a unicorn, a harp – must be something English. 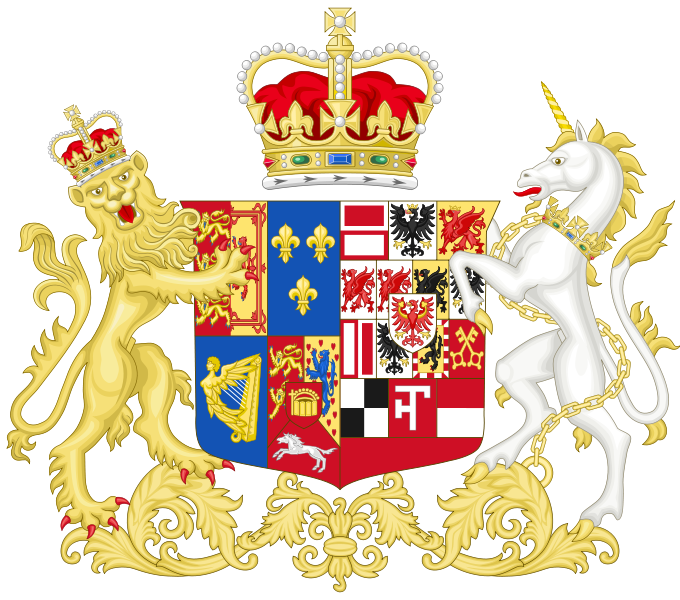 May I point your attention towards the right side from your point of view. At the bottom you see three nearly quadratic fields: The inner one is black and white quartered, then comes a kind of sign I have absolutely no idea about, and to the right we have a field with a red stripe over a white stripe. The black-white thing stands for Hohenzollern (Ger., Eng.) or Prussia, the red-white field shows the colours of Franconia (Ger., Eng.). What we have here is the coat of arms of Caroline von Brandenburg-Ansbach, Queen Consort of Georg II, King of Great Britain and Ireland – hooray.

Wilhelmina Charlotte Caroline von Brandenburg-Ansbach (born 1st of March 1683 in Ansbach, died 20th of November 1737 in London) (Ger., Eng.) was born into a branch line of the house of Hohenzollern. Her childhood was not happy: Her father (Ger., Eng.) died early, her mother (Ger., Eng.) had a (thankfully short) very unhappy second marriage, they spent their time mostly in a (crumbling) castle in Crailsheim (Ger., Eng.); when she was thirteen her mother died and orphaned Caroline was brought to Berlin to the Kurfürstin Sophie Charlotte (Ger., Eng.), who took care of the education of her godchild. Caroline was an intelligent, curios young lady, interested in history, philosophy and literature. Among her friends was the great LEIBNITZ (Ger., Eng.), with whom she had contact until his death 1716. In 1705 Caroline went back to Ansbach, where her half-brother reigned as Markgraf. Sophie von Hannover (Ger., Eng.) (the mother of the already mentioned Sophie Charlotte) send her grandson on a hunting trip to Middlefranconia; he met the young lady at the Markgraf’s summerhouse in Triesdorf, was impressed and on 2nd of September 1705 they married.
Her husband Georg (1683-1760) (Ger., Eng.) was, well, not so much interested in literature. More in hunting, warfare, oh and women, yes. His temper was uncontrolled at times. She was loyal – and he wrote her long and open-hearted love letters. The change came when her father-in-law became King of Great Britain and Ireland in 1714 (Ger., Eng.); they all moved to London, and Caroline found herself in the role of the first lady. In contrast to her husband and her father-in-law she took a real interest in the new task, she learned the language, took care of the politics and she showed diplomatic ability. Father and son were not afraid to put up a nice fighting against each other, Caroline tried to mediate; at one point she and her husband were even thrown out of St. James’, in the end she was successful, aided by WALPOLE (Ger., Eng.). In 1727 George I. died and her husband was sat on the throne.
By the way, the conflict between father and son was repeated with Georg II. and his son Friedrich Ludwig, who was left behind in Hannover when they had moved to London. When Georg II. left the country or went to war – I read somewhere that he was the last English King who actually fought with his men in the frontline – he always made her the regent, not his unloved (and seemingly not trusted) son. The rift was never overcome.
Caroline had an impact on the politics, from 1727 onwards for the next ten years England was not involved in an European conflict, the colonial expansion went forward. The Gin Act, (Gin Craze), and growing opposition, harmed her popularity. She had correspondence with people like THOMASIUS (Ger., Eng.), VOLTAIRE thanked her for the good reception he found through his exile in London (in the late 1720s), a certain musician called HÄNDEL devoted some minor works (Ger., Eng.) to her, George liked it too. Her husband went abroad and had his mistresses, the official mistress en titre Henrietta HOWARD (Ger., Eng., list of her colleagues, house) was one of her chamber maids, so Caroline was at grips with things.
She gave birth to eight children, and at the last birth something must have gone wrong. Since the mid of the 1720 she had to suffer from paynefull cramps in the abdomen; her health deteriorated in 1737; a last operation tried to remove a kind of tumour, but she did not recover. When she lay dying she told her husband to marry again, whereupon he answered “No, I have my fancies.” Dapper George, what a guy, but at least he understood what he lost, his grief was true.
A Franconian Markgräfin ruled the United Kingdom – one interesting woman!

* I took this image from this site, and hope that with this link all the gnu-license-things are satisfied.
Sources, besides wikipedia, here and here.
“Rule Franconia, Franconia rule the wa … diddelum …”