It’s a strange thing how we play along here on the web with our personalities and anonymity. Over time one develops a kind of internet alter ego, this figura or persona may be close to the real existing person or not, that’s an individual thing. Like an actor and his role.
Ed O’NEILL (Ger., Eng.), better known as “Al Bundy” (Ger., Eng.), once said that there is something of his own personality in the artificial persona (pretty much in fact), but it would be totally wrong to identify them. O’NEILL’s crux is – as it was and is for many other actors – that he always will be “Al Bundy” in the public eye. Whatever this “public eye” may be ; possibly a bored gossip writer in a sleazy newsroom … Would it be more convenient to imagine this writer awfully drunk or badly hung over ?
Of late I was trawling some gossip sites and looked at youtube and stuff, and always some person wanted to stick their tongue at me or hold their arse into my direction. Yes, I may be terribly behind and out of date – it’s all so last February.
But nevertheless,  the columns of the Daily Gossip for example are full of big arses of women, who are famous for having big arses. And other people, stars, starlets or F-celebrities, stick their tongues out. Or take photographs of themselves with other people in the picture (not so much, it’s only distracting, innit?) displaying body parts, trying desperately to be “sexy”, “erotic” or “interesting” – basically it’s just a cry for attention: I am here ! I am alive ! I live when you watch me. I am dead when you look away.
Sounds a bit like a robot program, perhaps for injured people, that only works when it’s needed and goes into hiding when it’s not called upon. Press the button (didn’t seventies mafia killers refer to themselves as “button men” ?), or simply look into this direction, and the arse twerking, tongue sticking, fake tanned bronzed zombie will shake whatever is there to shake. Or will pervert & reduce the fine art of self-portrait to “taking” a “selfie”. Like NIKE, the Greek deity of victory, was reduced to a hook on a gymnastic shoe.

Sometime in 1959 Saul STEINBERG (Ger., Eng.) took a brown paper back and draw an expression on it. Then he put it on his head. Inge MORATH* (Ger., Eng.) took some photographs. It’s called the “Mask Series“.
I am not STEINBERG ; the photographer is not MORATH – so whatever it’s worth, here is my “selfie”, tongue-less and twerk-free. 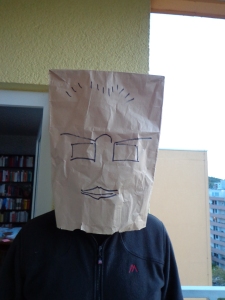 I fear I am a sorry old geezer now. But on the other hand I may only be in a mood. And because I am in a mood, here is some music to enjoy, all twenty minutes of it: Listen to Mr HALL, Mr DESMOND, and floating above them all, Mr. BAKER.

And whoever feels the need to stick out a tongue … shake their arse to me … oh dear … we’ve already seen it, darling … “eros” means not ramming it into the audience’s face !
But, on the other hand – I’m just another idiot with a paper bag on his head.

* I wrote about her and her picture of “Ms. Nash” here.